Practicing Democracy marks Jerrica’s third performance since her theatre debut in May. Coming hot off the heels of her portrayal of Mabel in An Ideal Husband at The Barn, she’s ready to give you the latest in election drama as Jenny Turner! 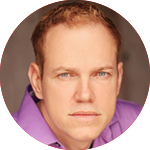 Michael J Miller is originally from Grand Forks, ND.  He is attending ths BFA performance program at University of Central Missouri, Warrensburg and is expecting to graduate in the Fall of 2017.  He was recently seen at Maplewood Barn theatre in an Ideal Husband, at CEC in Dirty Rotten Scoundrels, and before that in Stud Ducks at Talking Horse all here in Columbia, Mo.  He is honoured to be a part of this show’s premiere performances for the League of Women Voters.

Charlie Wilkerson is a familiar face to Columbia theatre audiences. He was last seen as Lord Caversham in Maplewood’s production of An Ideal Husband. His voice is frequently heard on KBIA’s Maplewood Barn Radio Theater.

You may recognize his voice(s) from the nigh on one hundred shows he’s recorded for the Maplewood Barn Radio Theatre on KBIA. He is also emcee and co-host of The Maplewood BarnCast along with Joe Bogue.

Trisch Vessar (usually spends her time behind the scenes as Moberly High School’s theatre teacher. Over the past several years, she has been involved with productions on and off stage at Timber Lake Christian Church, Madison Community Center Dinner Theatre, and Maplewood Barn Theatre. A couple of her favorite roles have been Grandma in “The Christmas Shoes” and being called “Oma” by her own grandchildren.

Michael Amantea (Tom Kelly) is delighted to be performing again. He has been seen recently in productions at Maplewood Barn and Talking Horse theatres. Michael has a master’s in journalism from the University of Missouri and would like to thank both his wife Amanda and his dog Boss for all the support. Enjoy the show!